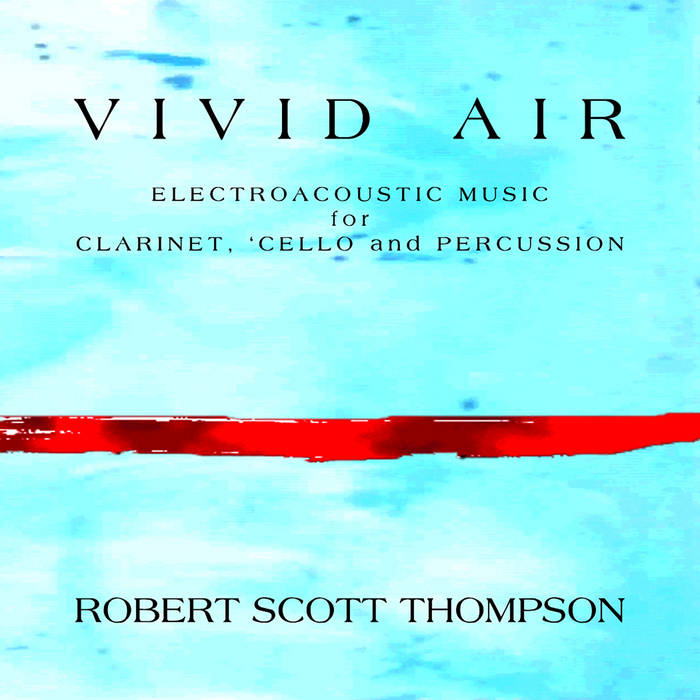 Passage (2009) was originally composed at the
invitation of clarinetist F. Gerard Errante and
first appears on recording as part of his Delicate
Balance (2010) disc. In this work, performed for
this recording by Tadej Kenig, the live acoustic
clarinet is deeply melded into the textures of the
electroacoustic component, yet is cast in the
role of a solo voice presented with a minimum
of signal processing in order to preserve the
distinctive tone and character of the instrument.
The musical concept of Passage developed
out of my engagement in composing ambient
music combined with my interest in sound
processing and transformational elaboration in
electroacoustic music. My goal was to create
a composition that was on the cusp of avantgarde
sensibilities (my over-arching approach
to music) and more direct musical expressions
emphasizing melodic materials within clearly
drawn harmonic fields. To this end, the clarinet
solo part is carefully blended into the texture of
the work to emphasize and embellish passing
harmonic implications throughout the sections
of the composition. The song of the nightingale
is featured prominently in the composition
and especially in the final section where signal
processing lends the song and otherworldly
metallic sheen.

Vivid Air (2010) is a work that owes a great
deal to the close collaboration of percussionist
Stuart Gerber with whom I have collaborated
on a number of works including Sanctum
(2007) and Out of the Vivid Air (2009). The
composition is organized into five gestural
fields, as indicated by the sectional titles, but is
continuous in sound. The various sections of
the work emphasize specific groupings of sonic
resources in the percussion instrumentation and
also the overall timbral trending from sounds
created by elaborated membranophones (drums
played with objects coupled to them, such as
clock chimes) toward metallic instruments
and sound qualities, through small instruments
and sounds of allusive origin, and finally
returning to membranophones played in a more
traditional manner. The formal design of Vivid
Air presents interactions of solo percussion
and electroacoustic sound interspersed with
passages that are purely electroacoustic. In the
spirit of acousmatic music, gestural qualities are
paramount, yet the origins of the sounds is often
obscured leading the listener into a sound world
where the real and imaginary mingle veiling
the authentic origins of the sounds. The use of
percussion instrumentation is key to this goal of
the composition as the sonic qualities of the solo
percussion materials and composed gestures
often blend significantly with the elements of the
electroacoustic sounds creating new amalgams
and sonic complexes.

The Ninth Wave (2001) was composed as a
dedication to cellist Craig Hultgren. The form
of the work is made up of nine distinct gestural
fields and is continuous in sound. The materials
of the electroacoustic component are created
from transformations of ‘cello source recordings
but also include sounds that are purely synthetic
— such as the “vocal” sounds in the central
section of the work which were created using
a variation of the CHANT formant synthesis
technique.

Outward to Infinitude (2010) is a work of
electroacoustic music that features various
acoustic sound sources and transformations
of them. In some ways this composition is
reflective of my work in ambient music and was
specifically composed for this recording to round
out this collection of works.

Robert Scott Thompson is a composer of instrumental and electroacoustic music. He creates work in a wide variety of forms ranging from chamber and orchestral music to works for the virtuoso soloist, acousmatic music, computer music, and video art. He is recepient of several important prizes and distinctions for his music including the First Prize in Musica Nova (Czech Republic), First Prize in the Pierre Schaeffer Competition (Italy) and awards in the Concorso Internazionale “Luigi Russolo” (Italy), Irino Prize Foundation Competition for Chamber Music (Japan), and Concours International de Musique Electroacoustique de Bourges (France), among others.

In 1991 he was a Fulbright Research Fellow at the Danish Institute of Electroacoustic Music (DIEM) and was most recently Composer in Residence at the Institut de Musique Electroacoustique de Bourges (IMEB) while composing a Commande Commission for IMEB.

He was named the Distinguished Honor’s Professor at Georgia State University in 1994, where he is currently Professor of Music and teaches composition and music technology courses in the School of Music. His music is published on recordings by EMF Media, Neuma, Drimala, Capstone, Cue Records, Hypnos, Oasis/Mirage, Groove, Lens, Space for Music, Zero Music, Twelfth Root, Five Points Journal, and Aucourant, among others.