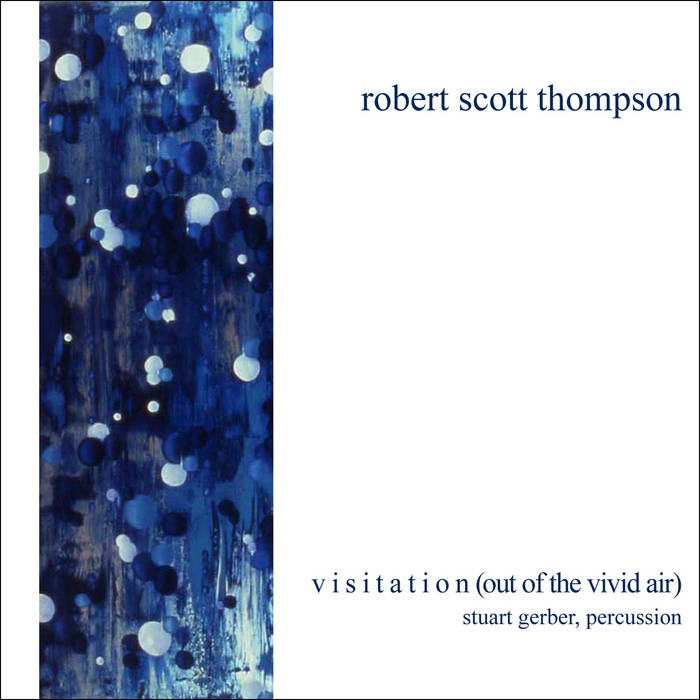 RICHARD ALMASI A wonderful balance of electracoustic experimentalism and ambient music. To me the music comes off as very earthy and organic, directing my mind towards nature. Favorite track: Vivid Air: III. Volutions.

Out of the Vivid Air is an octophonic electroacoustic work that grew out of another closely related work, Vivid Air, an extended thirty-two minute work for solo percussionist, real-time sound processing, and electroacoustic sounds. Both owe much to the close collaboration of Dr. Stuart Gerber to whom the score of Vivid Air is dedicated.

Out of the Vivid Air utilizes sounds drawn from the solo percussion part of the parent work, as performed by Dr. Gerber. Transformation and elaboration of the instrumental sound sources generated nearly all of the sounds heard in the composition. These sources include clock chimes (played in conjunction with bass drum to engage various resonance effects), flower pots, metal pipes and plates, small odds and ends, can lids, chains, coins, wood, paper and water. More traditional percussive resources include bamboo wind chimes, drums, and gongs.

The title refers to the notion of metacognition or, thinking about thinking – a pastime well known to all creative people. It also alludes to a realization that informs my music more generally; that our current technical means for developing musical morphologies engenders sonic and musical elaborations comprising a vast universe of newly discovered timbres and gestural interactions, many seeming only distantly related to their antecedents. New sonic resources are continuously appearing as if out of the vivid air.

This work was originally composed by invitation for premiere during the 30th Annual New Music Festival of the Mid-American Center for Contemporary Music, Bowling Green, Ohio in 2009, and is presented on this recording in a stereo realization.

Vivid Air, the parent work, is an elaborate suite of five movements for percussion soloist, real-time sound processing and electroacoustic sound in eight channels. The sonic idea for this composition is the careful blending of the live and electroacoustic elements into one sonic fabric.

The composition is organized into five gestural fields, as indicated by the sectional titles, but is continuous in sound. The various sections of the work emphasize specific groupings of sonic resources in the percussion instrumentation and also the overall timbral trending from sounds created by elaborated membranophones (drums played with objects coupled to them, such as clock chimes) toward metallic instruments and sound qualities, through small instruments and sounds of elusive origin, and finally returning to membranophones played in a more traditional manner. The formal design of Vivid Air presents interactions of solo percussion and electroacoustic sound interspersed with passages that are purely electroacoustic. In the spirit of acousmatic music, gestural qualities are paramount, yet the origins of the sounds is often obscured leading the listener into a sound world where the real and imaginary mingle veiling the authentic origins of the sounds. The use of percussion instrumentation is key to this goal of the composition as the sonic qualities of the solo percussion materials and composed gestures often blend significantly with the elements of the electroacoustic sounds creating new amalgams and sonic complexes.

VISITATION ~ Out of the Vivid Air, a two-channel work completing the series, invites the performer to interact with (and re-visit) aspects of the original electroacoustic composition within a carefully structured quasi-improvisatory setting – blending live percussion sounds with electroacoustic components. The gestures and timbres of the original materials bid visitation from the performer, creating an enriched context of interconnection and extrapolation. This version of the work was developed in collaboration with Stuart Gerber and owes much to his creative impulse.