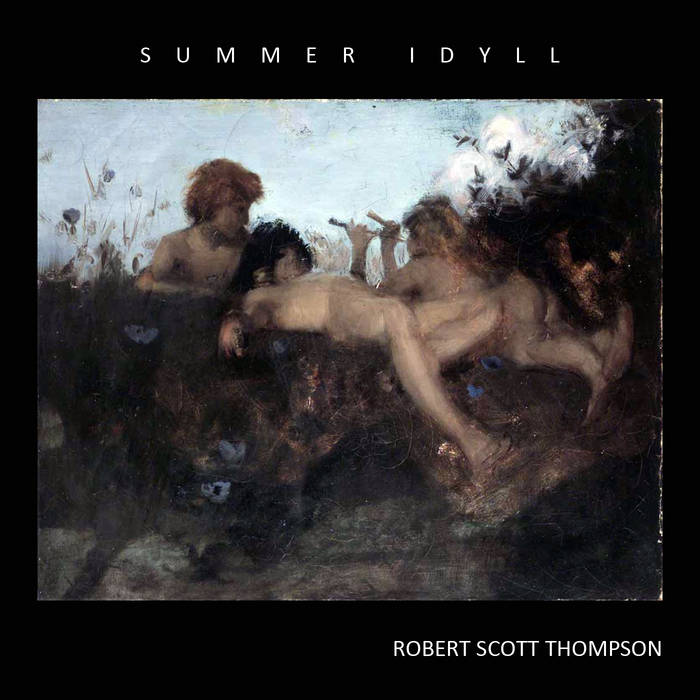 Purple Crow It's been a surreal summer - and Robert Scott Thompson's new album, Summer Idyll, suits those moments when one can manage to escape the chaos for a while, but in the back of one's mind there's still a simmering of background thoughts regarding the external world around us. RST is an amazing sound sculptor whom I respect highly and I recommend his recordings for everyone to explore and collect.

Robert Scott Thompson's latest album, "Summer Idyll" is a gem that encapsulates some of the characteristics of experimental ambience. If you pay full attention to Robert’s musical message, it will greatly reward you back with sensations that not many musicians can touch. (Synth Caresses)

This recording is a selection of tracks from the sessions of the summer of 2015. Several album projects are under development, including discs for Anodize, Relaxed Machinery, Dark Winter and Aucourant. Summer Idyll selects some of the out-takes from recording sessions for these projects and presents them in a mixed and mastered context.

Summer Idyll could be seen as somewhat of a mongrel-like recording by Robert Scott Thompson, given that it consists of out-takes derived from sessions for albums currently under development for Anodize, Relaxed Machinery, Dark Winter, and Aucourant. Yet it holds together as well as any other in the electro-acoustic composer's canon, and had one not been made aware of such a detail, one would not have thought for a moment that there's anything of an out-takes-like nature about its content. Certainly the fact that the six tracks were created during the same time period—the summer of 2015—is one reason why the collection sounds as cohesive as it does, but an even stronger reason is Thompson's artistic sensibility, which infuses every moment of the release's eighty-three minutes with his characteristic sensitivity to composition, arrangement, and sound design.

Summer Idyll is dominated by three long pieces, the half-hour title track the longest, that make the three short pieces seem like miniatures by comparison. The album's restful tone is established by “Sublimation,” a prototypical Thompson setting in its shimmering intermingling of electronics and piano. The listener is repeatedly teased with hints of melody that resist settling into formal melodic expressions; instead, sounds meander and drift yet not without explorative purpose. Contrasts from one piece to the next are evident, with Thompson threading wordless vocals into “Perigee” and percussion into “Slow Rotation of Stars,” the latter of which sounds so much like a Paul Schütze production from the ‘90s it could pass for one by the Australian artist. The long-form, almost gamelan-like “Summer Idyll” exemplifies a generative-styled quality that recalls Eno works such as Neroli and The Shutov Assembly, unlike the foreboding ambient-drone “Lacuna,” which plays like a sheet of ice transcribed into aural form for twenty-two chilled-to-the-bone minutes—a summer idyll it most definitely isn't. Crystalline, meditative, soothing: all such adjectives apply to these classic ambient constructions. Notes hang in the air, stretching out languorously across extended episodes of stillness and calm, and tension reigns in the way Thompson postpones resolution until a track's end—if then.

As the first hints of Autumn reach the upper midwestern United States, so does Robert Scott Thompson‘s latest release, Summer Idyll. In tune with the album’s title, Thompson’s approach here is pastoral, focusing on lilting ambience.

Unlike some of Thompson’s recent electroacoustic works, the efforts herein include gentle, shimmering waves (rather than walls) of sound, slowly plucked string instruments, and subtle, tribal percussion. While over 80 minutes in length, two tracks take up more than half of that duration. The 30-minute title track is a combination of analog and digital synths with extensive processing, while the slightly shorter Lacuna features a hint of darkness by way of its drone-like atmospheres – perhaps foreshadowing of the winter to come?

Thompson has characterized Summer Idyll as containing early or alternate versions of tracks for an upcoming album on the Anodize label. If these are outtakes, it only reinforces his proficiency as a sound sculptor. Bravo.