Play is the Supreme Bricoleur of Frail Transient Constructions 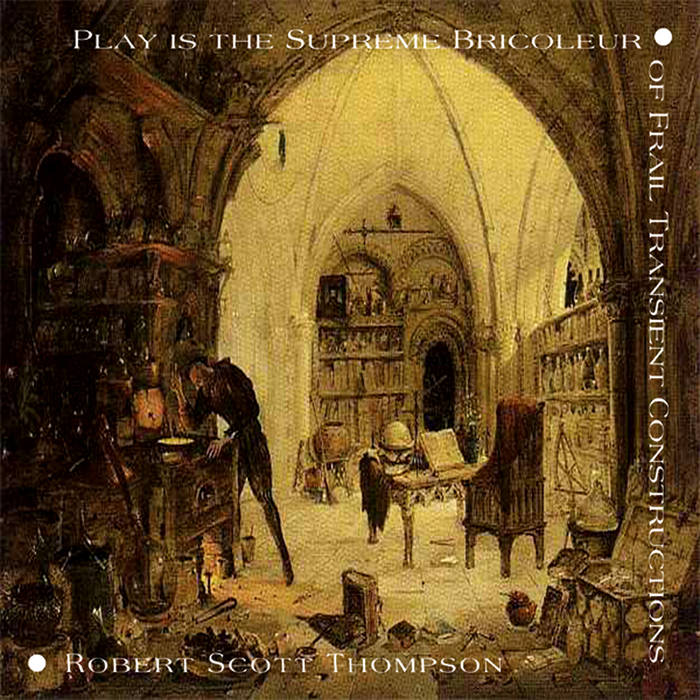 A bricoleur is defined as “one who engages in bricolage,” or “construction (as of a sculpture or a structure of ideas) achieved by using whatever comes to hand.” Robert Scott Thompson, who heads the Center for Audio Recording Arts at Georgia State University’s School of Music, certainly assembles a bricolage of sounds, moods, and influences, from ambient space music synths to clattering field recordings to modern classical strings, bass flute, and piano. This is an audio collage that respects the individuality of its disparate elements while effectively working them into a coherent whole. A truly abstract work, Play Is the Supreme Bricoleur confronts the listener with the prospect of unrestrained sound. It’s also a remarkably deep recording; Thompson clearly puts his studio expertise to good use, crafting an album that densely teems with activity guided by the experienced hand of a compositional veteran. This album’s cover seems to depict an alchemist at work, and that’s just what Thompson is. These constructions may be “transient,” but they’re certainly not forgettable. (Beats per Minute)

Anyone intending to seriously grapple with Robert Scott Thompson's latest collection of electro-acoustic works (acousmatic music, if you prefer) should first give his/her attention to the word bricoleur. A term used in multiple disciplines, a bricoleur is a jack-of-all trades, someone who uses a variety of tools, even sometimes unorthodox ones, to devise solutions to creative problems of one kind or another. Given his unusual instrument constructions, Harry Partch might be seen as a bricoleur, while the television character MacGyver also could be seen as one, given his propensity for devising solutions to problems using the found objects at hand.

That Thompson sees himself as a bricoleur, too, is borne out by the playful and explorative approach he brings to the recording's five settings. And, sure enough, the liner notes reveal that they are, in fact, exercises in bricolage in how they bring together disparate elements so as to conjure an aural fantasia that's pitched somewhere betwixt the magical and the scientific—Thompson is thus as much alchemist as bricoleur, to not put too fine a point on it. Interestingly, no account of sound sources is provided except for credits given to Yochanan Sebastian Winston and Stuart Gerber, who provided Thompson with bass flute and percussion sounds, respectively, to work with. If Thompson were to have included a comprehensive account of the sound sources he used to construct the material, one guesses that the list would have been long, given the rich sound world presented. Perhaps he chose not to include such detail so as not to distract the listener away from concentrating on the sound in its pure form rather than become sidetracked by technical minutiae.

Vaporous, ghostly masses of strings and choirs drift through the five settings, with contrast emerging in the bell strikes and crystalline drones that occasionally resound and in the metallic textures that give a rawer, industrial edge to the otherwise softly swirling vistas. The significance of the guests' contributions to the recording shouldn't go underacknowledged, either, as Winston's mysterioso flute playing is one of the key reasons why an ethereal setting such as “Deformative Activities of the Imagination” has the impact it does, and Gerber's percussive sounds likewise bolster the recording's already rich timbral range (presumably he's the one responsible for the rustling textures clattering through “Engraved in Freehand”). In general, Thompson's settings are adventurous and constantly mutating, more moodscapes than formal compositions, and the album's fifty-six minutes flow by with a dream-like quality that enhances their immersive character.

Dr. Robert Scott Thompson's latest work, Play Is the Supreme Bricoleur of Frail Transient Constructions stands as another testament to his utter mastery of the electroacoustic medium. Using acoustic sounds, he creates a universe that can only be described as parallel. Yes, you may recognize some of the sound sources but no, you have probably never heard them revealed in this unique way.

Thompson is one of the first generation composers who grew up with the disparate worlds of C++ and UNIX along with The Dead Kennedys, Blondie, Boulez, Joji Yuasa and Robert Fripp. In other words, whatever you'd like to call him, you have to hyphenate your descriptive (sorry folks, "Slash" is already taken by a quarterback as well as a guitarist!) Unlike so many of the abject failures who pose as composers yet hide behind the artifice of compositional process and the easy enticements of technology, Thompson leads with his ears (which are excellent). That's probably why his music SOUNDS so good - many young composers would do well to emulate his example.

Which they have the opportunity to do since he's a full professor at Georgia State University in Atlanta... but get your hyphens out because that's only one of the hats he wears. In addition to his full time activities as an academic, he also runs a successful "record" company, stays active in research projects both here as well as in Europe and Asia and somehow finds the time to compose his amazing music. What a guy.

Anyway, Play Is the Supreme Bricoleur of Frail Transient Constructions is an unmitigated success. Buy it, live with it, play it for your friends but most of all, just enjoy it. It's great stuff by a great master.

These five works of acousmatic music are united under one theme – the actions of the bricoleur as the fashioning of dream images, myth, and meaning though playful intervention with disparate objects and things; the method itself poised somewhere between scientific and magical. Throwing together, making linkages and amalgams, working between being and becoming, structure and event – it is in the space between realization and concept where one finds art.

My work in electroacoustic music, since I first began to compose in this medium in 1976, has been centrally associated with the concept of object – which I later come to understand as the l’objet sonore proposed by Schaeffer. I am continuously interested in the transformation of sounds and their objectification, but I also realize that from the very beginning I have been equally interested in the expression of the ineffable, and a uniting of internal and external knowledge in the music I compose.

Composing electroacoustic music has remained a central focus in my work as a composer precisely because this kind of practice lies halfway between scientific thought and mystical or magical thinking. There is both the scientist and the bricoleur at work in the crafting of the material objects of these compositions. My aim in cultivating the l’objet sonore is the creation of both a material object (a sound) and also an object of knowledge and intuition.

This set of works alludes to the background notions that a have shaped my thinking as a creative artist and bears sonic reference to the means and methods through which I often express the creative context of my composing as a bricoleur – attempting to bring the imaginal, mystical, and ineffable into the theatre of the audible. These works were not so much engineered as they were conjured – arising out of the deep of silence.

I owe a debt of gratitude to my friend and colleague Yochanan Sebastian Winston who provided conjured sounds on bass flute as source materials for two of the compositions in this collection and also inspirations to continue to be guided in my work by ear and heart.