Of Natural Magic and the Breathing of Trees (Album) 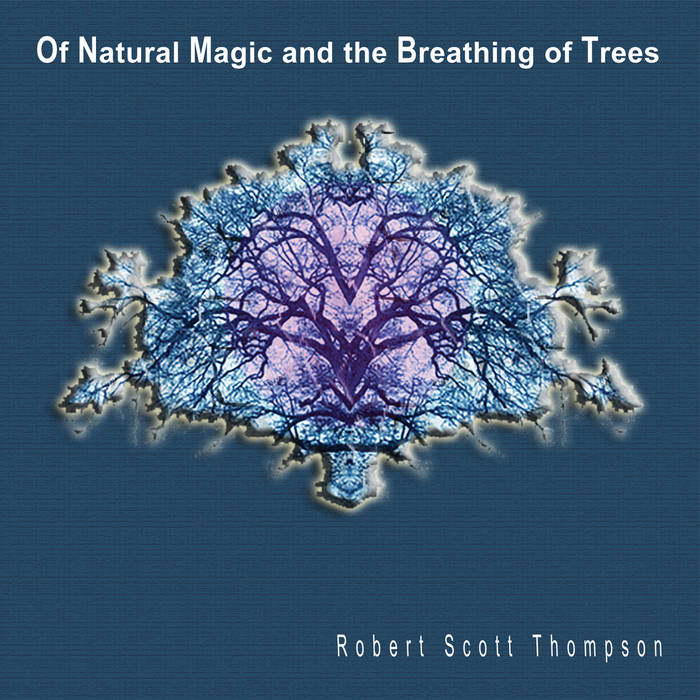 Music Won't Save You

Robert Scott Thompson’s work in the area of computer music is largely oriented toward high modernism in the tradition of the founders and pioneers of the field such as Pierre Schaeffer, Stockhausen and Xenakis. His work is also informed by the naturalistic soundscape and importantly notions of contemporary expressions in chamber and orchestral music. Thompson’s aesthetics attempts to blend and meld the real and imaginary into a musical context that invites deep listening and engagement in the listener. The music – the tonality, sonority, transformation of materials – is the primary focus rather than the outworking of a specific technique or technology. In recent years Thompson has become an adherent of the techniques of ambisonic spatialization and increasingly creates work that is based in this approach to both multi-channel and stereophonic presentation.

This recording is different from the one containing the two versions of the title track - Of Natural Magic and the Breathing of Trees. The other recording, robert-scott-thompson.bandcamp.com/album/of-natural-magic-and-the-breathing-of-trees features two different versions of this composition (and different mixes) and would be of interest to collectors.

How to describe the indescribable? Music, by its very nature, is so subjective, that a review is like trying to describe color to a blind. But here I am, writing a review of a new work by modern master Robert Scott Thompson, a composer/musician who still manages NOT to be mentioned in the same sentences as Berio, Stockhausen etc. As he rightly should, as far as I am concerned.

This new piece is yet another magnificent trip into aural other-worldliness, where the most exciting and sensual of sounds and chords join hands to form magnificent soundscapes, the sort one really want to get lost in. This is music that any lover of "experimental" music absolutely should seek out and explore, as it doesn't get much more exciting than this. I am not a musician or anything, so I don't know many of the buzzwords or the fancy technical jargong, all I can and will say is: give this music the time it requires in your life, because you will not regret it.

This is music to be seduced by.

One of the difficulties in reviewing electroacoustic music is describing what you hear in terms of the familiar. There is a disconnect between music that is largely generated without the help of traditional musical instruments and the usual technique of illustrating music in terms of what actual instruments are doing. Thus the challenge of Robert Scott Thompson‘s latest release, Of Natural Magic and the Breathing of Trees. The sounds therein are hauntingly similar to what one might hear in modern classical as well as the ambient music of Steve Roach or Klaus Schulze. But it is different enough to feel alien.

Unlike Thompson’s recent works, such as Palimpsest, this release focuses on different aspects of ambisonic spatialization – pieces specifically composed for multi-channel playback with speakers at particular locations relative to the listener. Nonetheless, the album is quite enjoyable even when it is coming out of only two speakers.

The 30-minute title track leads off, featuring ringing tones, decimated samples, and even Japanese-sounding plucked instrumentation. Broken piano chords punctuate falling debris. Flutes rise and fall accompanied by non-rhythmic scraping metallic percussion. There are no drones or sound walls per se, or build-ups to a crescendo. Instead, a combination of keyboard washes, electronics, and crackling elements come and go to create a haunting soundscape.

Magiae Naturalis is a quieter piece that focuses on incidental percussion, scraping, and slowly breaking glass. Background tones create a troubled atmosphere. Sattva begins with gently percussive electronics and overlapping drones. The track is rhythmic in nature, with tuned and found-object percussion. But it also combines ominous chording with an Eastern feel. Every Something is an Echo of Nothing features bassy rumbling and sparse metallic hammering, while Metta ends the album with haphazard bells, deep and spacious partial drones, as well as metallic birdsong.

Even though the theme of the titles appears to be the natural world, Thompson has created something that could easily be viewed as post-industrial or otherworldly. The result is one of his best electroacoustic releases.

A couple of noteworthy albums of electronic music by US composers have found their way to me recently. Of Natural Magic and the Breathing of Trees by Robert Scott Thompson was released last year and pretty much tells you everything you need to know in that title. Aesthetically, the five pieces contained on this album are a melding of acousmatic and ambient, with some implied whiffs of new age, quasi-spiritual incense thrown in. On the one hand, there’s something rather dated about the timbral palette of these works – it wouldn’t have been a surprise to learn they were composed in the mid-1990s – but this isn’t necessarily an issue (indeed, of itself this could be regarded as appealing) and in any case the way the ambient outlook – which dominates overall – is fleshed out with acousmatic details makes this a negligible concern.

This ambient outlook manifests primarily at a structural level. Put simply, there’s a looseness to the structure of these pieces such that their moment-by-moment activity is more significant – or, at least, attracts more focus – than their long-term direction. It’s not unreasonable, in fact, to say that many of them don’t have a clear overall sense of direction, and the extent to which this feels problematic varies from piece to piece. In the case of the title work, it is a problem; there’s a lot to enjoy – the mix of cimbalom- and bell-like pitches interspersed with soft bursts of turbulence, and particularly the way Thompson creates ‘melodies’ apparently from the noise of metallic friction – but due to its half-hour duration it ultimately comes to feel meandering and inconsequential, which for a work evidently seeking to tap into a certain meditative quality is pretty fatal. By contrast the 10-minute Magiae Naturalis really works; bringing to mind the earlier music of Adrian Moore, its ambient mindset is more potent playing out within a much shorter time-span.

One of the most engaging aspects of these pieces is their juxtaposition of slower-moving, cloud-like elements and faster, sometimes pulsed, materials, typically arranged in the middle- and foreground respectively. This typifies the best work on the disc, Sattva, resulting in a genuine fusion of ambient and acousmatic aesthetics, in the process creating a highly engaging relationship with the listener, with a strong sense of perspective in which the music often comes across like a multi-faceted object floating between the speakers. This is also true of the other two works on the disc, Every Something is an Echo of Nothing (though this piece feels more like a sketch than a fully-completed work) and Mettā, a rather lovely study in unimposing drift, coloured throughout by an assortment of bells and chimes. Here more than anywhere else, Thompson creates a focused meditative soundworld, and it’s a beautiful place to be.

Taken as a whole this is strange but attractive music that creates an interesting and sympathetic synthesis of potentially very different aesthetic attitudes. Of Natural Magic and the Breathing of Trees is available from the composer’s Bandcamp site in physical and digital editions.