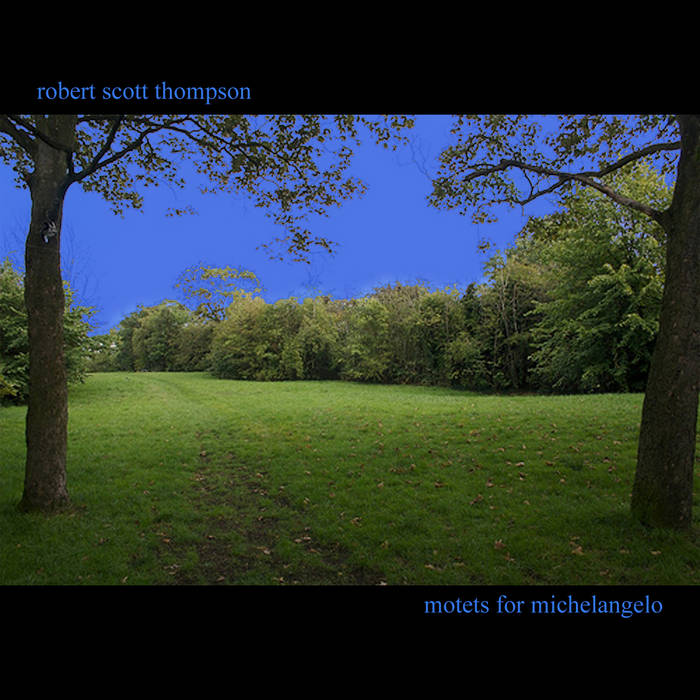 Motets for Michelangelo is conceived as a long-form ambient electroacoustic composition in eight sections and is intended for continuous playback at relatively low volume. Based on a field recording of wind in trees, forming the background sound structure for the composition, the work is a tribute to the late auteur Michelangelo Antonioni.

I don't know where he gets his inspiration from, but with Motets For Michaelangelo, RST has created yet another gemstone, an ethereal and soothing work. Tranquil and serene, this tribute to the late Italian filmmaker, centered around his classic film Blow Up (from which the wind theme originates) creates a mood in which one wants to loose oneself forever and ever.


Robert Scott Thompson releases his latest 2009 album Motets For Michelangelo once again via his own Aucourant Records label. This disc is divided into eight tracks ranging in length from just under three minutes to almost fifteen, yet the interconnected flowing nature of the music is clearly intended for continuous playback with each piece seamlessly running into the next. The foundation material for the album is a field recording of wind in trees that runs throughout the whole composition, intended as the sleeve notes point out for listening at relatively low volume - a mood, an atmosphere, an ambience. Since the material was developed as a tribute to the late Michelangelo Antonioni with open references to Blow-Up - the mood of the film bears strongly on the slightly haunting tenor of the music. Robert Scott Thompson's broad range of experience is clearly evident both in production quality and in the confident, experimental nature of this album - when we spoke about it, he said this release is "a bit out there" - so it is.

Long-form electro-acoustic ambient. The natural sounds of air movement and the wind disturbing leaves and branches, along with other less distinguishable environmental noises, act as a constant thread through Motets For Michelangelo. The ongoing hiss, rush and gentle turbulence rises and falls in wave-like undulation, flows in rippling currents, bathes the expanse in sonic haze. Atop this tranquil sound-canvas are overlaid a variety of musical effects that often have a similar sense of random distribution and delivery to the breezes beneath. The jangle of chiming metallics, welling pads and atonal surges, vocal strains distantly reminiscent of far off choral chants, deep muted bell tones, plaintive strings and synthetic effects all ascend from the air forming each track into a distinct passage of the unfolding story. Percussive ephemera and sibilant motes along with a wide variety of peripheral detail enhance the main structures so that this minimal album is never without plenty to catch the ear. Melodic content is sparse and very much understated when present, yet there are moments of quite touching beauty as passages of harmony do float to occasional prominence.


Michelangelo Antonioni, that is, of Blowup and L'aventurra, not the Michelangelo of David and the Sistine Chapel ceiling fame. Electronic composer Robert Scott Thompson brings his considerable artistry to an hour-long, eight-part electro-acoustic suite that pays tribute to the Italian film auteur, renowned for films such as L'eclisse and La notte that teem with aimless characters suffering from ennui and despair. Accompanying info indicates that the recording is based on a field recording of wind in trees (most likely a reference to the park foliage which assumes such importance in the 1966 film Blowup) and is designed for “continuous playback at relatively low volume” but such notes could mislead the listener into thinking that Motets for Michelangelo is ambient music in the “wallpaper” sense. In fact, there's a considerable amount of activity in play at any given moment, whether it's a choir singing during “Three Faces” and “Maryon” (the title alluding to Maryon Park where key scenes in Blowup were filmed) or the ambient tones and field sounds of water, birds, crackle, and, yes, wind that figure so prominently. Making good on the sacred aspect of the “motet” form, the melodic material in “Ennui” is suffused by an almost hymnal melancholy. Gloom and mystery shadow the wavering tones and bell-like whistles that waft through “The Gaze of Michelangelo” while “Beyond the Clouds” (the final film Antonioni directed, with assistance from Wim Wenders, in 1995) plunges even deeper, courtesy of clangorous industrial sounds Thompson adds to the dense layers of winds and tones. Antonioni's films are so much about mood, and it's this that Thompson captures so deftly in the brooding and meandering character of the material. Much like the film's characters, ghost-like tones drift down reverberant pathways and linger for minutes at a time as if studying the landscape for clues that might help solve the mystery at hand.