Morning of the World 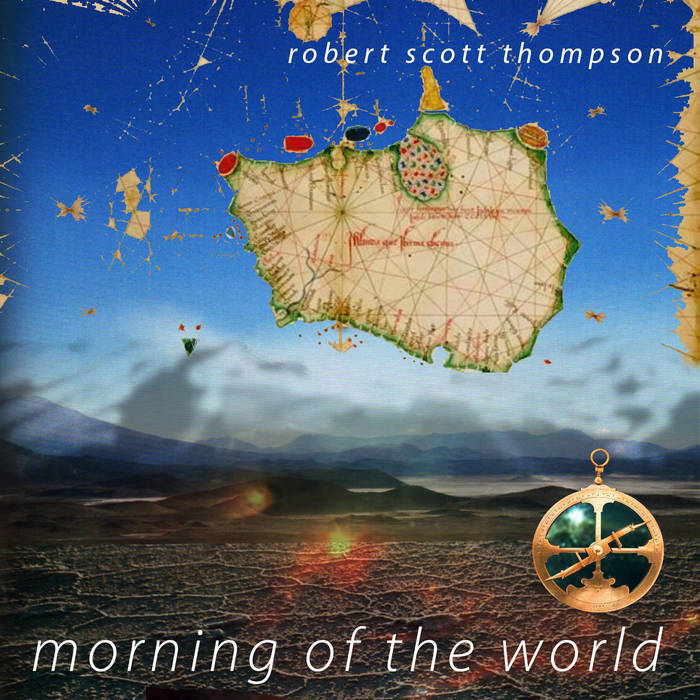 Bill Merrill I especially love the composition called “Chorale.” What a magnificent piece of music!

A listener coming to Robert Scott Thompson's music for the first time might be somewhat daunted by the size of his ever-growing discography, something that in itself doesn't surprise considering that his recorded output dates back to 1991. Where does one start, in other words, when there are as many as twenty-five albums from which to choose? One very viable solution presents itself in the form of his latest collection, Morning of the World, for the simple reason that the album's contents provide a conveniently representative portrait of the electro-acoustic composer's various styles and preoccupations.

Among other things, the hour-long album includes ambient settings reminiscent of those infamous Harold Budd-Brian Eno collaborations as well as pieces that draw from other cultural traditions, such as gamelan and Chinese traditional music. The album's gamelan dimension surfaces within the opening “Morning of the World (Lattice Crossing),” where percussion flourishes and cross-patterns of vibes and piano lend the material a stately, martial-styled rhythmic character (the related “Morning of the World (Landscape Vista)” retains the vibes component, yet re-casts the material so that a more meditative quality is generated). The stop-start rhythmic drift of “Trace Left Behind” suggests some tangential connection to Chinese traditional music, as does the erhu-like instrument that appears as part of the arrangement.

Elsewhere, sound traces of the natural world, aquatic and otherwise, seep into the ambient-styled “Figured in the Drift of Stars (Bubble Mix)” to give its Budd-styled piano playing additional colour. The mood is often serene, but Morning of the World also includes moments that are vigorous, too. “Eidetic,” for instance, derives much of its heft from the beat pattern Thompson threads into its design. As pure a representation of Thompson's style as there could possibly be, “Morning of the World” returns to close the release with fourteen minutes of expertly modulated gamelan-ambient music.

Though Thompson's often described as a musical alchemist, Morning of the World suggests that a better term might be sound painter, given the luscious quality of the album's settings. There's a richness and vitality to Thompson's music that distances it from New Age, whatever surface similarities between them present themselves in a serenading piece such as “Descanso.” His music is also truly electro-acoustic in the way myriad acoustic and synthetic sounds are woven into multi-hued wholes (no better example of which is the album's long-form title track). All such things help make Morning of the World, as already mentioned, an excellent starting point for anyone new to Thompson's world.

First impressions of this new release from the prolific genre-defying Robert Scott Thompson are of great beauty. Each track seems to pull at the heart, evoking a deep, wistful melancholy whilst at the same time holding out a new-dawn-like brightness and optimism. There is a fresh, airy tone of wonder that permeates much of the album - very uplifting, very tranquil. These are very subtly structured compositions, their meandering, organic natures almost giving the impression that many of the melodies have arisen naturally. Yet there is much melody: rambling bells and chimes; smooth, heaving synths; burbling, twinkling electronica and effected piano; plucked and bowed strings with an oriental feel; keening wind instruments. There is a great breadth of percussive material: lush global drums and metallics, shakers and spills; a few of the tracks even feature some rather cerebral beats - light, hypnotic break beats hinting at drum and bass rhythmical forms. In fact, the array of supporting sounds on this album is astounding - Thompson's finesse as a sonic sculptor demonstrated both by his ability to create and bend musical sources as well as by his elegant application of the results. Classically graceful, highly evocatory and most professional.

I am only in possession of the digital version of this release and so have only the front cover art work as seen above. The cross-influence of art work and music is really effective here: the blue sky clarity and freshness; the hard-to-identify exotic imagery; the looming shadows sending the listener to the artwork and back again, each influencing perception of the other nicely.

Robert Scott Thompson has produced a wealth of highly individual releases since his Aucourant origins in the early 1990s. With an array of formal qualifications and awards to his credit, the degree of professionalism and the technical quality of his output is beyond question. Yet as Morning of the World exemplifies so well, Thompson is by no means a 'technical' composer/performer, his music is very moving, always inventive and exploratory, and particularly difficult to pigeon-hole. The twelve tracks of this release range from just under three minutes to just over fourteen and hang together masterfully as a consistent sensory journey. Explore Morning of the World at Robert's Bandcamp page or watch the Aucourant site for more information.

Released on Aucourant Records (www.aucourantrecords.com) in December 2014, Robert Scott Thompson’s Morning of the World is a sublime journey across the world in sound. Ambient in its overall nature, it nevertheless colors outside the lines, as it were, using rhythms and traditional instruments in unique and compelling ways. Less about long-form and more about impressions, each track is an aural snapshot, if you will, of a place? a time? a dream? a wish? The titles only suggest and guide, and the listener is invited to follow the path into their own imagination.