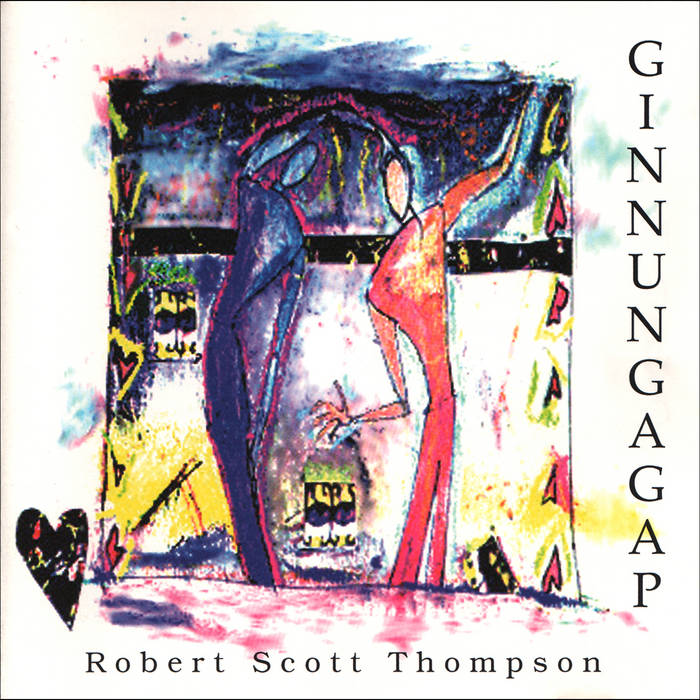 This recording was started in 1992, after my father's death. He was, in his youth, a composer, and his scores were an inspiration to me. This recording is dedicated to him. (rst, 2020)

"Ginnungagap is Robert Scott Thompson’s most important CD. An essential CD under the umbrella genre of electronic-ambient. The CD earns a five-star rating. Listeners will enjoy this disc. Deep listeners will embrace it.” - All Music Guide
___

Ginnungagap is ambient/world music for fans of the Eno/Bowie/Gabriel world music concepts. It's all here: world, pop, rock, avant-garde, classical, and is unique in its arrangements. The music and performances are first-rate throughout and will strongly appeal to fans of more energetic ambient music, if there is such a thing. This is not my favorite Thompson release, but then again I prefer his more subtle ambient textures. If you prefer your music with more of a bounce and variety, this release may be the one for you.

I was disappointed when I got Ginnungagap and listened to it for the first time. To me, it seemed like a collection of nice sounds arranged in the wrong order. Now, I just finished listening to it for the fourth time and it keeps growing on me. This is a great album, one of my recent favorites! Very different from everything else I've listened to.

I prefer RST's melodic side, the one he shows in Ginnungagap and Aether. Still, my favorite is Air Friction, because it provides a good balance of this melodic side with his (light) ambient side.

Two thumbs up from me too. In case you didn't read a message I posted a while ago, I said back then that I didn't like Ginnungagap at first (a nice collection of sounds arranged in the wrong order, at least that's what I thought). My attitude changed a bit on the second listen and it changed a lot on the third one. That's really a nice album, and very different from everything else I've heard, despite its being similar sometimes to Patrick O'Hearn's music (I don't think RST is going for that, but I could be wrong).

Go ahead. Either try his dark side (Cloud Cover perhaps) if that's what you're into, or his light side, if your taste is similar to mine.
___

Ginnungagap is a recording which blends futuristic electronica with world music inflections and classical ambient music techniques. Similar in style to Peter Gabriel, Patrick O'Hearn, Brian Eno, Robert Fripp, David Sylvian and Bill Nelson. This recording is perhaps one of Robert Scott Thompson’s best works and is gaining in popularity and garnering critical response, long after its release in 1993.

When recordings cross stylistic boundaries, as Ginnungagap does, it becomes difficult for reviewers to categorize the music. Some listeners have remarked that they have never heard a recording that sounded like this one. High praise for an iconoclastic and individualistic work that brings a new voice to contemporary instrumental electronica.