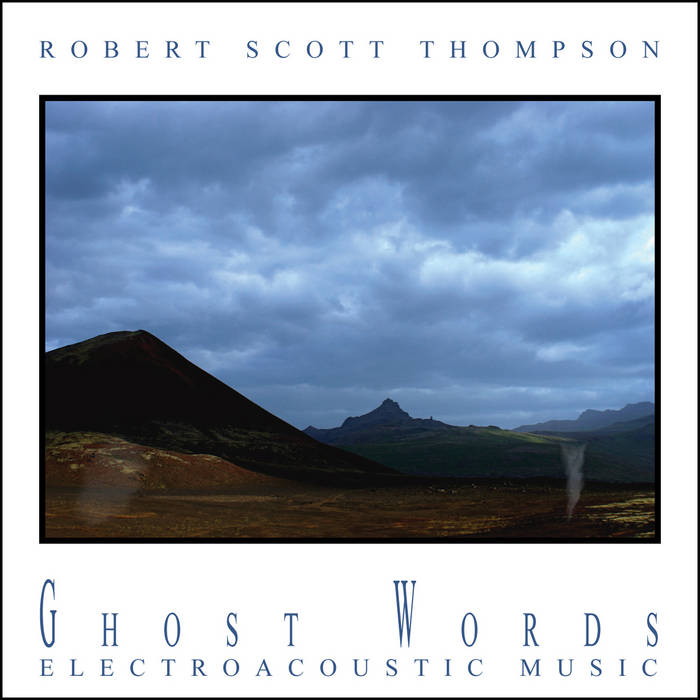 GHOST WORDS is a concert suite of electroacoustic music in four movements, originally composed for world premiere presentation at the SOUND Festival of New Music in Aberdeen, Scotland, on November 15, 2008. The concert premiere presented the work in multi-channel surround and this new studio recording is a stereo realization of the original concert mix.

Though abstract in character, there's nevertheless an openness and diversity to the music which not only allows the listener a thorough introduction to Thompson's personalized take on the electro-acoustic soundscaping genre but to detect traces of other composers; one thinks perhaps of Ligeti, for example, during the cold and barren stretches that surface during “Orgone” and “Shadow of Water on Sky”, and echoes of Stockhausen and Varèse emerge too. (Textura)

An eminently approachable listen—easy, even—and one whose constant development and shifts in design render it engaging throughout. It's a sonic journey in the truest sense, with alchemist Thompson demonstrating an arresting command of dynamics and timbre.

If you enjoy experimental ambient music and have no need for melodic content - then Ghost Worlds might be for you. Don't expect an 'easy-listening' experience, these are engrossing sound experiences that mesmerize and enthrall.

The impetus of this work stems from my general interest in various intersections between aesthetics, creativity, consciousness and experience. The title is taken from “orgone energy” as described by psychoanalyst Wilhelm Reich for the “universal life energy” which he claimed to have discovered in published experiments in the late 1930’s. Reich claimed that orgone energy was a “life energy” which filled all space, was blue in color, and that certain forms of illness were the consequence of depletion or blockages of the energy within the body. Another concept that informed the composition of the work is the “zero point field” theorized by some physicists which also ultimately suggests that consciousness is a distinct and pervasive energy that exists outside of the confines of a “body” and permeates the multi-dimensions of space and time.

The composition is originally in 8-channels and is organized as two complementary 4-channel streams. The materials of the work combine both purely synthetic timbres with those of acoustic origin. The acoustic materials used include bamboo, voices, piano, and various others sources. The synthetic materials include those created by filtered noisebands, additive synthesis, formant synthesis, and related techniques.

I compose in a manner that attempts to blend a rigorous and intellectual approach with a balancing intuitive perspective. Ultimately, I am interested in musicality and gesture, and the abstracted ideal of beauty in sound. Some of the materials of this work are made possible by algorithmic procedures while others are sculpted and manually arranged.

This work was commissioned by IMEB and composed in Bourges in 2007.

II: Shadow of Water on Sky

An essay in sound-mass, this composition is concerned with the exploration of composites of acoustic and synthetic sounds and the unfolding of dense fields of timbre. Among the acoustic sounds used are transformations of choral sonorities and percussive sounds of various types. These sounds are applied to various processing strategies involving tools to modify the sound spectrum into new amalgams and combine them with sounds that are purely synthetic.

Sanctum inherits its large-scale formal attributes from a structured improvisation on metallic percussion instruments (including tam-tams, gongs, crotales, cymbals, and found objects) which becomes, after compositional efforts to shape and delimit a temporal unfolding, the scaffolding for the elaboration of a number of additional sound sources including vocal sounds, instrumental sounds and purely synthetic sounds. Techniques used in this work include algorithmic processes for elaboration of materials, analysis-resynthesis, additive synthesis and strategies for the antiphonal treatment of the sound materials. An emphasis is placed on the transparency of musical textures and a delicate balance between them. Percussion source materials were performed by Stuart Gerber.

The title of this work is taken from a line in Medbh McGuckian’s poem Moon Script, from her collection The Book of the Angel. Composed in two quadraphonic streams, or layers, this 8-channel work presents a quasi-developmental unfolding of gestures and musical materials. Chief among the sound sources used are vocal samples, tuned glass instruments, and percussion sounds, together with various sounds of purely synthetic origin.

Like many of my works composed in the last decade or so, this piece has no specific technical agenda. Algorithmic compositional techniques are used together with serial techniques, and the free flight of imagination. Commonplace methods for extrapolating sounds into variegated forms are used in abundance to shape the material of the sound world of the composition. As is the case with much of my music, a background formal geometry is key to structuring the work as a multi-sectional musical experience.

This work was commissioned by IMEB and composed in Bourges in 2007.

Throughout the hour-long concert suite Ghost Words, Robert Thompson, an electroacoustic and “classical ambient” composer and music professor at Georgia State University in Atlanta, couples intuitive exploration with formalized Algorithmic compositional methods and serial techniques in the shaping of myriad elements (acoustic sources that include bamboo, voices, and piano; synthetic materials that include those created by filtered noise-bands and digital synthesis) into a four-part work.

Though abstract in character, there's nevertheless an openness and diversity to the music which not only allows the listener a thorough introduction to Thompson's personalized take on the electroacoustic soundscaping genre but to detect traces of other composers; one thinks perhaps of Ligeti, for example, during the cold and barren stretches that surface during “Orgone” and “Shadow of Water on Sky”, and echoes of Stockhausen and Varèse emerge too. The work was premiered at the SOUND Festival of New Music in Aberdeen, Scotland in November, 2008 in a multi-channel surround format, which the studio recording attempts to replicate in its stereo presentation.

“Orgone” (the title comes from “orgone energy,” a term psychoanalyst Wilhelm Reich used in speaking of “universal life energy” which he claimed to have discovered during 1930s experiments) startles when it opens with a loud clanking noise and then quickly quietens into a less jarring setting of snake-rattling noises, ghostly winds, and phantom voices. Here and elsewhere, digital processing is used to fuse acoustic and synthetic materials into a shape-shifting mix of choral chanting, synthetic sounds, percussive treatments (rattles, bells, tam-tams, gongs, crotales, cymbals, found objects), and assorted other sources (tuned glass instruments, vocal samples). The work culminates in the twenty-one-minute “Ghost Words After Trees Fall,” which is often as barren in sonic character as its title suggests.

As described, Ghost Words might sound like a rather intimating work, but it's actually an eminently approachable listen—easy, even—and one whose constant development and shifts in design render it engaging throughout. It's a sonic journey in the truest sense, with alchemist Thompson demonstrating an arresting command of dynamics and timbre.

Deep ambient environments and experimental soundscapes. These sonorous expanses crawl with haunting peculiarities and mysterious layers of sonic fog. Opening with a heavy bang and thick, grating disturbances Ghost Worlds declares itself to be a challenge to the senses right from the start. Beatless and melody free; reverberating chimes jangle, clang and toll; shimmering drones ebb and flow; voice-like snippets flit through the air; shufflings, clatters, rattles, turbulence effects all enmesh into one organic whole. Less obvious sounds include bamboo, tuned glass instruments, filtered noisebands, piano, choral sonorities - as the full title indicates, synthetic and acoustic sound sources are both given equal weight in these other-worldly arrangements.

The mood is consistently one of sombre expectation and uncertainty, sometimes almost weightless and drifting, often grounded by means of the frequent percussive elements - metallic impacts and dense atonal shiftings. There are some disquieting passages, most often when hints of humanity arise within the mix - disembodied voices, choral wafts, remote presences.

Ghost Worlds Electroacoustic Music comes in a jewel-case presentation with a full colour single sheet insert. The front cover holds a crepuscular desert scene with heavy sky set within broad white borders. The rear holds a tracklist displayed on a muted twilight tree portrait - black text on grey twigs and branches. Within is a detailed discussion of the music track by track, inspiration is outlined, recording details explained and commission information given. There is also a brief biographical section on Robert Scott Thompson.

This 2008 release from ambient musician Robert Scott Thompson is released through his own Aucourant Records label. The album consists of a 'concert suite' of four extended recordings totaling fifty six and a half minutes in total that were premiered at the SOUND Festival of New Music in Scotland in November 2008. The artist explains that his music arises from "structured improvisation" and an interest in "various intersections between aesthetics, creativity, consciousness and experience." Often the music "has no specific technical agenda" and is structured via a "background formal geometry."

If you enjoy experimental ambient music and have no need for melodic content - then Ghost Worlds might be for you. Don't expect an 'easy-listening' experience, these are engrossing sound experiences that mesmerize and enthrall.

Robert Scott Thompson is a composer who, like Phillip Werren, had until recently flown entirely under my radar. Only by ordering a CD from Aucourant of music by Erdem Helvacioğlu did I become aware of Thompson. So now, just in case that, as with Werren, Thompson has flown under other people’s radar, Asymmetry Music Magazine offers a couple of reviews of Robert Thompson’s music, starting with Ghost Words. Probably we will do the same for Werren’s music, too, some day.

Ghost Words is a four movement suite–Orgone, Shadow of Water on Sky, Sanctum, and Ghost Words After Tree Fall–that plays seamlessly, though the movements are easily distinguishable, and would be even without tracks. Orgone is made up of various short electronic phrases, including some moderately processed voices, over accompanying drones. Shadow of Water on Sky, on the other hand, is made up solely of long, interweaving lines. Sanctum opens with some fairly quiet clangs, but so different are they from the slow weaving of Shadow, that the opening to Sanctum is quite startling. Otherwise, Sanctum combines the long lines (but less weaving) of Shadow with the phrases over drone idea of Orgone to create its own sound world. While it also has voices among its more defined, metallic noises, it differs from Orgone in having longer “melodic” lines.

Ghost Words After Trees Fall opens as Sanctum did, with a clang, but a much larger, louder, more complex clang. Indeed, everything here, including the quiet things, is more direct and distinct than anything in the other movements. Everything is more forceful and overt.

Thompson’s sounds will be familiar to anyone who has heard any amount of electroacoustic music, but his way of using those sounds is his and no one else’s. I don’t think anyone would mistake his music for that of anyone else. I’m not sure how to put that impression into words, but certainly part of Thompson’s quality for me is his transparency and simplicity. There are rarely more than two or three different things going on at once, and each thing as clear and distinct as anything in Webern, say, or Satie. Clean and pure.

I found everything to be quite engaging.