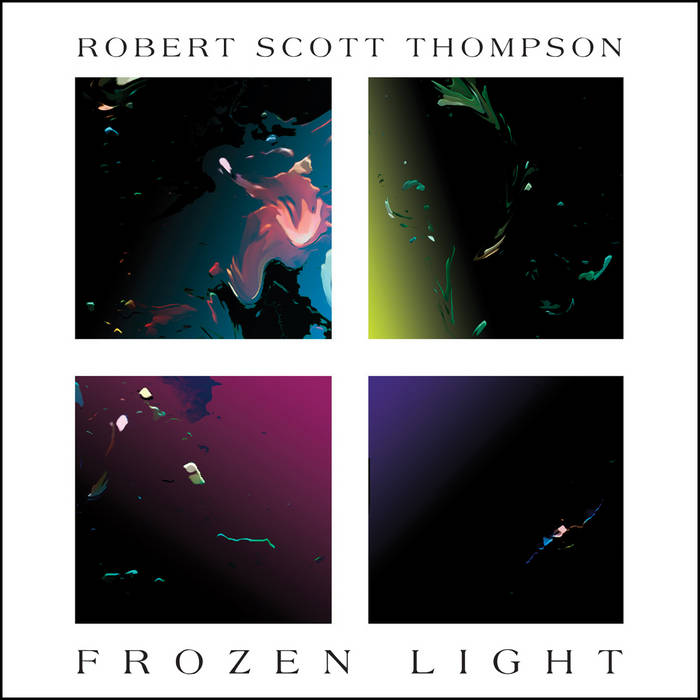 Brian Bourassa Loving the abstract minimalistic approach. Ambient music lends itself to this style quite well.

Another favorite of the RST collection.

Frozen Light is a new collection of four long-form ambient works from Robert Scott Thompson. Based in the style of abstract minimalism and comprised of drones, loops and sonorous events, Frozen Light extends the language of long-form classical ambient music. Intended as a means to provide a sonic tinting to the environment, Frozen Light can be listened to at various levels of awareness, ranging from rapt attention to detail to background soundscape. Frozen Light is an important new recording in the long-form ambient genre and is sure to be of interest to both connoisseurs of ambient music and those engaging classical ambient for the first time.

Nearly seventy time-suspending minutes of glacial ambient mood music from Robert Scott Thompson packaged in four long-form pieces. Envisioned as an exercise in environmental “sonic tinting,” Frozen Light perpetuates the ambient dictum that a genre work should be both engaging enough to warrant and sustain attention while also be capable of blending subliminally into the background. The recording opens with “Drone Chroma 2 ~ Azure,” fourteen minutes of tinkling meander, atmospheric electric piano colourations, and distant female vocalizing. “Drone Chroma 3 ~ Magenta” follows with soft string synthesizer playing and percussive accents whose tinny quality suggests the inner strings of a piano being plucked. A sound much like the soft snore of a lion sleeping persists throughout “Drone Chroma 4 ~ Gold” while tiny harp-like droplets and glassy tones extend across the track's fourteen-minute running time. Recasting the sonic palette in a slightly different direction, softly shimmering cascades of electric guitar tones drift through the tranquil expanses of “Drone Chroma 1 ~ Violet” alongside tinkling percussion which adds sparkle to the piece's otherwise cool streams.

Admittedly Frozen Light doesn't add anything significantly new to the ambient genre—it's very much in the tradition established by Brian Eno decades ago — but it does offer as good a starting point as any to those wanting a good introduction to the style, and Thompson's work as always exudes polish and refinement.
- Textura

Initially these four pieces appear dark, even tenebrous as the low drones stir into motion, lit only by softly coruscating chimes and peculiar textural material. But as the tracks unfold they begin to feel increasingly inviting, enveloping the listener as if floating weightless, intrigued by the constant surrounding bursts and blossoms of colour. The gloom holds heavenly tints and warm currents, the chimes at times falling into soft melody or tranquil harmony.

Frozen Light comes in a jewel case with a single sheet insert. On the front cover are four crisp graphic images relating to the four compositions on the album. On the back cover a closer image of swirling paint on a black ground fills the whole panel. The four track titles are here with timings alongside, Aucourant Records contact details below. Inside is a repeat of the tracklist against a different background image - here the colours appear as if glowing from behind a sheet of frosted glass.

Released in 2008, Frozen Light is a set of four long-form ambient compositions works from American artist Robert Scott Thompson. The album is released through Aucourant Records and sits atop an impressive discography of engrossing 'classical ambient' recordings. Promotional material explains that these pieces are "intended as a means to provide a sonic tinting to the environment, Frozen Light can be listened to at various levels of awareness, ranging from rapt attention to detail to background soundscape." That description sounds very apt to me - in fact this release is likely to lead you through some of those states of consciousness, setting powerful mindscapes of great depth and emergent beauty.

Frozen Light is an album for ambient fans that enjoy steady state sound zones with plenty to hold the attention, should you wish it to. The structure may be minimal but the attention to detail is not.

This release from 2008 features 68 minutes of introspective ambient music.

Mellow tonalities of a minimal nature establish an airy disposition that fills an infinite vista. Keyboards provide the music's nucleus in the form of hesitantly expressed chords that stretch the tunes' definition beyond any harmonic stance but dally before straying too far into melodic territory. At times, the background drones accrue a stronger residence by swelling softly into a lush firmament.

Some notes achieve individuality by the prominence of their resonance amid the pacific tones. At times, hints of sounds originating from stringed instruments (like a harp) punctuate the flow.

While some percussion can be discerned, the beats are isolated and suppressed, rendering them barely noticeable. Solitary bell tones are frequently utilized, approximating momentary glimmers among the pastiche of frozen light.

These compositions exemplify an ambience designed to pacify the listener, maximizing the potential for introspection. Their peaceful harmonic demeanor is steadfast, without any mounting tension or drama. The CD's title is quite apt, for Thompson has adroitly harnessed fragile sounds to capture photonic displays petrified in a slow metamorphosis.


"Frozen Light" consists of four individual pieces, ranging from thirteen minutes, to twenty minutes in length; however, although there are significant stylistic differences between the four pieces, their overall effect is quite consistent in mood and style. (In other words, you can play the whole album, without affecting the basic "mood.")

Although Robert Scott Thompson (RST) entitles the four pieces as "drones," don't imagine this as being one of those boring albums of a more-or-less uniform level of electronic noise (the kind that makes you wonder whether the sound is coming from your stereo, or whether you just left some appliance on). Far from it: RST's music is pure ambient---diverse and interesting enough to be listened to with full attention, yet unobtrusive enough to be used as "background" to other activities.

Chroma 2 (Azure) opens the album, with soft and slow notes from an electric piano, ethereal vocal sounds, and even occasional "tings" from a cymbal; this is my favorite track, and creates a definite "spacemusic" texture. Chroma 3 (Magenta) is a bit darker, with soft strings, with more electronic sounds and some minor dissonance, along with various percussive tinkles and thuds (resembling John Cage's "prepared piano," in some instances). Chroma 4 (Gold) sounds much like two harps playing, over a diverse and subtle background. Chroma 1 (Violet) is even more "electronic-sounding," yet resonant, with light persussive sounds.

Whether you've not yet encountered RST's ambient work (I'd recommend Frontier, The Silent Shore, and Forgotten Places as introductions), or if you're just picking up another album of RST's, I predict this one will get regular play on your system.