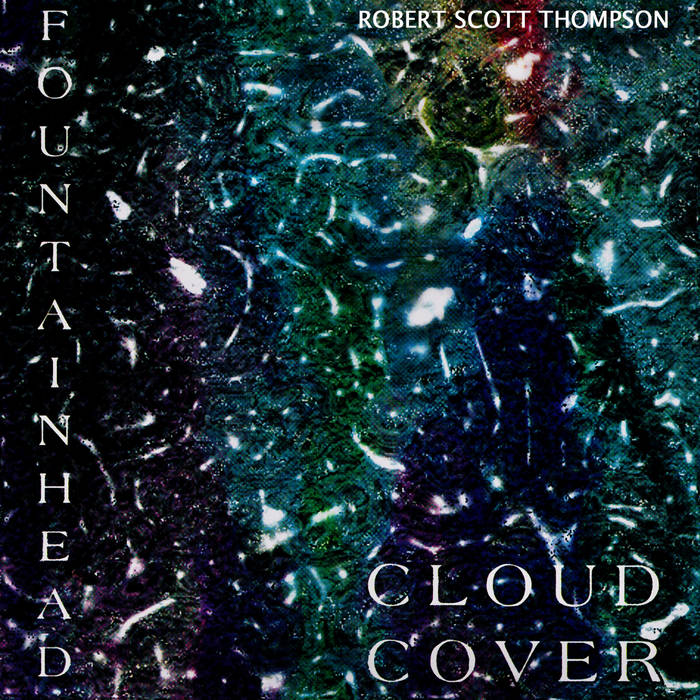 CLOUD COVER is the debut of the ambient music project - FOUNTAINHEAD - composed by well known ambient music composer Robert Scott Thompson. This recording, just under 70 minutes in duration, features a beautiful collection of nine tracks of classical ambient music. The title track is 18 minutes long and envelopes the listener in a floating, elegant, sonic reverie. Other tracks feature propulsive, yet subtle, percussion. A wonderfully balanced album which flows together perfectly in its uniquely defined sound space.

One of the basic tenets of classical ambient music is that it can be listened to on a number of levels, from rapt attention to the casual perception of the music as background sound. At each level of listening awareness different qualities and attributes of the music are revealed. This aspect, combined with the exquisite composition of the music itself, creates a CD that will attract considerable response from radio audiences and private listeners alike. CLOUD COVER is a fine addition to our growing catalog of ambient music and will find a permanent place in the collections of all ambient music connoisseurs.

***
This is an imaginative ambient album, mainly because of the innovative concepts in the sonic and musical palette.” - Amazing Sounds Magazine


“A ‘Must Have’ for any ambient music collection.” - Last Sigh Magazine

Under the guise of Fountainhead, Robert Scott Thompson has delivered a fabulous, beautiful album of (largely) drone based ambience. Brian Eno and Thomas Koner are triangulation points for this disc, but Thompson is no-one's acolyte in this strongly individual release which further brings together his classical ambient and avant-garde computer compositional personae.

The album as a whole has an ethereal majesty, and Thompson demonstrates a masterful placement of elements within tracks and the sequencing of the whole disk. The broad sources for his sounds adds an extra dimension to what is fascinating ambience. Whether this is a 98 or 99 release, it will deservedly make it onto many 'best of …' lists, and underscores his growing reputation in the world of ambience. And, oh yes, I like it alot!

Fountainhead is the pseudonym of ambient composer Robert Scott Thompson who has been involved in some of the more interesting releases as of late, primarily The Silent Shore, Frontier and The Ambient Eclipse (on Oasis/Mirage). With RST you get a return to classic ambient music, long stretches of drawn out soundscapes which allow the listener time to internalize their own thought processes. It's not something that can be said lightly but in Robert Scott Thompson you have the equivalent of a Steve Roach or even Brian Eno to a degree, statements I have made in the past and I still agree with. The quality of his work is consistently high. I've raved about RST enough in the past, and I feel like I 'm repeating myself. Check out his works on Oasis or Aucourant, you won't be disappointed. I think his best is yet to come but rest assured based on his past outputs I am not one to complain. This is about as good as it gets with ambient music, a form of music I'm very partial to. Chances are that you probably won't find his works in the shops, especially if you live in Australia but check out the web sites for more info and order direct from the man himself. Highly recommended.

Cloud Cover is a bit less experimental and more ethereal than Thompson's recent work under his own name, but in much the same vein. Fans of the quiter moments on The Silent Shore will definitely find a home here, as will anyone with a taste for layered, floating ambient atmospheres.

Cloud Cover features the creative works of Robert Scott Thompson and weighs in with more than 70 minutes of high-quality ambient music. The album is slightly more spacey than some of his other releases and includes some very subtle, but effective percussion elements thrown into the mix. The music generally floats through elegant phases of mellow sounds and draws the listener into his web of beautiful space music. Highly recommended for all connoisseurs of space music.

Dreamy synthetic atmospheres fused with differential minimalist drone, sub-melody and multi-percussion are some of the elements used by Robert Scott Thompson in this classical ambient release, "Cloud Cover"; it is an excellent addtition and 'must have' to the ambient music enthusiasts collection or those who enjoy minimalist drone with exotic eastern-edge rhythms.

Enigmatic, mysterious and misty. Soft, tender and delicate. Peaceful, moving and flowing. All these epithets are quite suitable for the music of "Fountainhead", the new project, released by Aucourant Records.

"Cloud Cover" is a classical ambient. This is a music, which invites us to immerse into the depths of unknown, other worlds or abandon ourselves to a solitary contemplation. It creates a specific surrounding, covers a listener, and gives him an opportunity to concentrate on the things, he considers most important for the moment. Still, if we would stop only on this aspect of the album music, one more important detail would be missing: "Cloud Cover" is good as a not unobtrusive background. You can not hear the music attentively, but just use it as a rather intelligent helper for various activities. And this is the advantage of the album (as well as the advantage of the classical ambient!).

Sometimes a little bit gloomy, sometimes more light - but you ca be sure that it is never pressing - the music of "Fountainhead" gives the impression of space. With the help of this music you can enter your inner space or just feel it. This music can be attributed to minimalism. And these very means of expression are good to feel the infinity of both inner and external worlds.

And so, while listening to the "Cloud Cover", you can not be bored, and you just wish to swim in the flowing, airy streams, created by the "Fountainhead"...

It's a journey again to other times and other places where worlds merge and blend into each other, then diverge again and drift apart in a kind of interdimensional shift! The music has at times an eerie effect to it, an alien feel as if it were being broadcast from a cosmic, archetypal repository of delicately and exquisitely crafted sound structures. Each track has its own distinctive character with mesmerizing electronics emanating from deep within, blending with tibetan bowls in places and altogether sculpting a sonic landscape where mystery and alchemy mix and give rise to states of mind where the natural shapeshifts into the supernatural and travels a path never explored before!

The music has some slow-evolving, tense moments but then picks up speed and metamorphoses into magnificent sounding passages that give one the impression that something horribly significant and ominous is being worked out, a truth of cosmic proportions is being prepared to be revealed and the listener's mind gyrates in awe and in anticipation of this imminent apocalypse!

Music usually can serve as a mood altering medium but the way RST uses sound results in a complete transfer of mind to a surreal level where all the limits lift and experience becomes unconstrained and free to expand and move into the "imaginal", a realm between fact and fantasy!

RST is a master artist, a whimsical sorcerer of sound, a designer of dreams made of pure vibration. It would be hard to listen to his work and not immediately recognize the genius behind it. Cloud Cover gets better with each listen as different and subtler elements and nuances of the music become apparent and to fully appreciate the depth and value of this album one has to devote some time to it, feel it, touch it and assimilate it until one becomes so familiar with it, you can almost call it home!