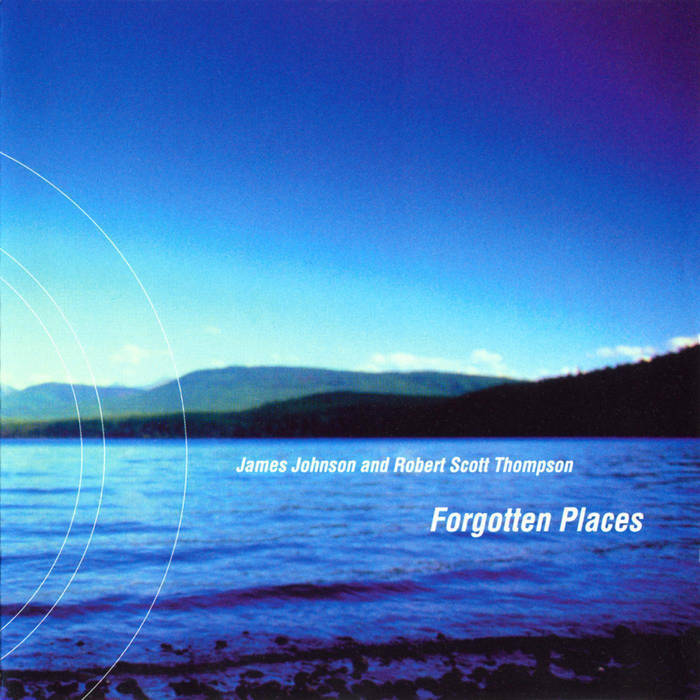 Robert Scott Thompson has spent a great deal of time in the “perpendicular universe.” James Johnson has been flirting with that zone for quite some time. On Forgotten Places, they make that journey together. The long-awaited collaboration between Robert and James is now available! And it is a sonic treasure! Robert’s recent focus has been on his experimental and computerized avant-garde sound designs. James has blossomed into one of the pre-eminent minimalists of the new millennium.

This release has it all! It is packed with gentle ambience, drifting minimalism and soothing nature samples. There is even some evidence of Robert’s experimental stylings but the disc is mostly soft expansive minimalism. Both artists are right at home in that arena. The smooth refrains and sweeping synth washes surround the samples and a solemn acoustic piano augments the electronics. Deep listeners will explore the depths of pastoral beauty and relaxation. The emotional and spiritual investments are high stakes. Robert and James both expressed how smooth and effortless the exchange of ideas has been. Each recalled that there was a synergy at play that was devoid of ego. The result is a gentle ride to the intensity of the perpendicular worlds.

'The Pearl’ (Eno/Budd) for the new millennium” - Wind and Wire

“The dreamy and lilting pianoscapes of Johnson with Thompson’s select embellishments and treatments are in perfect balance.” - All About Jazz

“Absolutely must be heard to be appreciated ... sheer beauty” - Instrumental Weekly
___

Forgotten Places is an excellent and breathy recording with lush piano elegies awash in a deep sonic fabric that is profoundly reminiscent of Brian Eno, as well as James Johnson and Robert Scott Thompson's previous work. This is an excellent recording and one that explores a new sonic ambience, as well as carrying a profoundly holistic vibe and a sound so serene that soothes and relaxes. Forgotten Places is a pick and one that you should certainly take the time to listen to, as the organic feel that's documented on this recording is hard to find in even the best Ambient recordings.

The more I listened to the collaborative album between Robert Scott Thompson and James Johnson, Forgotten Places, the more I tried to isolate what it was that Robert "brought to the party" which made this CD such an astounding piece of work. I heard definite elements of James Johnson's trademark minimalist ambient piano and keyboards (some which were new on this CD), but I also knew there was a musical element that represented a marked, if not a drastic departure, for the man (Johnson) I once referred to as the heir apparent to Brian Eno.

It was, perhaps, the twelfth or fifteenth listening. I was preparing Sunday dinner for an (quite ill) Kathryn, who was asleep on the couch. The setting sun was streaming into the kitchen from the back sunroom¹s windows and Onyx was outside harassing squirrels on a perfect early autumn evening. I felt a sense of calm brought on by the combination of hearing this music I loved along with performing an activity that I loved (cooking). Wham! That¹s when it hit me! James Johnson has always worked in long-form music, including his destined-to-be-classic effort with Stephen Philips, Lost at Dunn's Lake (an album-length piece of music). Robert, on the other hand, is consummately talented at piecing together shorter songs, unified by an intangible feel, yet still quite varied (if one breaks down the music technically). That was the key to this unique album! And that is also why I¹m prepared to make a statement that¹s quite bold, even for a critic like me (who's prone to wax eloquently about many album I enjoy).

Forgotten Places may well be The Pearl for the new millennium. If you¹re not familiar with The Pearl, it's a considerably older recording, a collaboration between Brian Eno and Harold Budd (two musicians more or less credited with creating the genre of minimal ambient music). The Pearl is considered, by many, to be one of the finest and most influential albums ever recorded in this genre. And yes, I¹m now fully aware what I have written about Forgotten Places. And yes, it¹s that good.

Ten tone poems, each unique and suffused with an amazing balancing act of emotional impact - serene yet brimming with tension, tragic yet achingly beautiful, mournful yet content, and melancholic yet hopeful. This truly is the perfect union of two superlative musical talents!

The music on Forgotten Places can be as restrained as gentle minimal piano notes suspended over a soft whisper of synthesizers, or it can carry strains of synth strings, synth choruses, overt electronic effects, or even synthesized woodwinds to flesh the sound out until the music is like a miniaturist piece of neo-classical music. Like an assorted collection of fine gems, e.g. jade, opal, sapphire, onyx, ruby, and, well, pearl, each song on the album sparkles in its own individual way.

The opening number, "A Slow Return," will sound instantly familiar to Johnson fans, with minimal piano accented by both a solitary synth string and string section, along with hushed synth choruses. The sound is so fragile and delicate, yet so beautiful that it fills the room with a warm glow. "Resonant Landscape" starts off with a cello-like sound, soon joined by other strings (a viola, perhaps), evoking comparisons to Tim Story, until the subtle dissonance of what sounds like a flute briefly flits into view. As the song develops, it becomes a duet of sorts between floating synth chords and piano, with occasional contributions from a solo violin. The piece has a fuller sound than the first cut, yet the comparison to Story¹s brilliant miniaturism is right on the mark. As stated above, the music deftly maneuvers between polar opposite evocations - peaceful yet with a thread of regret running through it...an unasked question or a word of comfort not offered in a time of need perhaps. Heavy duty stuff? Well, my emotional response to the album was pretty intense, but the music on Forgotten Places is not in the least bit oppressive. That's the genius of these two musicians, i.e. their combined ability to weave such complex and deep emotions into music that can be heard as something relatively simple (this is, of course, the very essence of minimalism when it's done right, as it's performed here).

While I have only described two songs, I'm aware that I have to rein in my enthusiasm somewhat or no one will finish reading this review due to its length. Again, I want to stress that the individual selections on Forgotten Places brim with individuality, yet the common thread of piano, synth, and a minimalist approach winds its way throughout all ten cuts. There are moments of dissonance and atonality, but never in the least are these harsh or obtrusive. Instead, these occurrences (and they are rare, believe me) serve as brilliant counterpoints, effectively undercutting any possibility (remote as it would be otherwise) that the listener would feel the music is too warm or too "pretty." Cuts like "Innocence Lost," which approach a darker texture, with more overt spacy synth effects, still retain a core of humanity, the same way that Tim Story does likewise when he eschews piano (such as on Eyelids of the Sea from Beguiled).

Favorite songs for me would be the opening number ("A Slow Return"), "Stolen Moment," "Then & Now" (with gorgeous use of synth choruses and synth woodwinds - or so they sound to me), "Low and Clear," which contains brief environmental sounds (water lapping at the shore) amid a less melancholic use of keyboards and synths, the lovely but quite sad "Malay," with cello, violin, piano and keyboards, and the album closing "Endless," which ends the CD on a somewhat optimistic, yet not necessarily cheery note.

Fans of The Pearl should (obviously) order this CD immediately! So should fans of either of the two artists (Budd or Eno) who recorded that album. In addition, lovers of Tim Story¹s work, and those of you out there who own (and love) the late Dan Hartman's New Green Clear Blue will also find this CD to your liking, I'd wager. Unless you are almost zealously committed to only long-form ambient music or are loathe to listen to piano mixed in with electronic keyboards, I would be amazed if you don¹t enjoy (to put it mildly) Forgotten Places as much as I did. Whether or not you feel it deserves to be compared to The Pearl I can¹t say. In my opinion, if it doesn¹t equal that masterpiece, it comes as damn close to it as anyone ever will. Kudos to James and Robert. Need I say it? My highest recommendation.

The journey has begun! To Forgotten Places, by James Johnson and Robert Scott Thompson. The aural scenes encompass all the serenity and beauty lost in an ordinary day of hard work, strife-- toiling to find ones' self in a world of myriad emotions. Sit back. Relax. Let this ambient journey take you to sound fields reminiscent and provocative of life's simple pleasure: peace. Upon your travels, decide your fate as you contemplate the ether world where dreams have endured...in timeless, Forgotten Places.

Deep, expansive tones reverberate soothingly throughout the ten tracks that comprise this very pretty work. Sparse piano echoes across air, clinging to delicate drones and light, flowing synthesizers. As on past works by Johnson, unmistakable references to Budd and Eno abound without being derivative. Robert Scott Thompson is almost too perfect a partner, as their similar styles meld so seamlessly that I would not hazard a guess as to who plays what besides Johnson's beautiful piano. The rich atmospheric sounds and textures permeating the disc are representative of past work by both artists. For example, I could picture "Resonant Landscape" as a lost track from either Johnson's Surrender or Unity CDs, or Thompson's The Silent Shore. The music is precariously yet perfectly balanced at a midpoint between bright and sad. It could be music to languish in at nighttime, or to relish in the early morning hours. The experiences would be totally different but the effect would be equally pleasant. Some pieces do lend themselves more to one mood or time than another. "Innocence Lost" and "Malay" definitely lean toward the melancholy, whereas "Low & Clear" has a lighter character to it, and is distinguishable as the only track without piano. Light or dark, a thoroughly relaxing and luxurious feel is maintained throughout.

Forgotten Places (2001) does not reveal its strength right away but this album has become one of my 25 most favorite ambient cds. When I choose ambient music these days it is mostly to either provide a background to something I am studying and want zero distractions or to dilute music with lyrics, so I don't feel overloaded by meaning and have a chance to reflect on it. I often load my cd changer with 5 discs, 2 or 3 of them being classical, world, ambient jazz or ambient. When I choose my ambient music I still want it to... feel alive. To me Brian Eno's music is alive, I sense the spirit within Music For Airports, for example. I have listened to a lot of ambient music which sounds atmospheric and has this cosmic feel to it, which I love, but I guess it is the big bang theory cosmos, quite empty inside and just not for me. Forgotten Places is full of spirit; it brings calming peace; it relaxes but motivates you as well.