Alphabet of the Trees (Album) 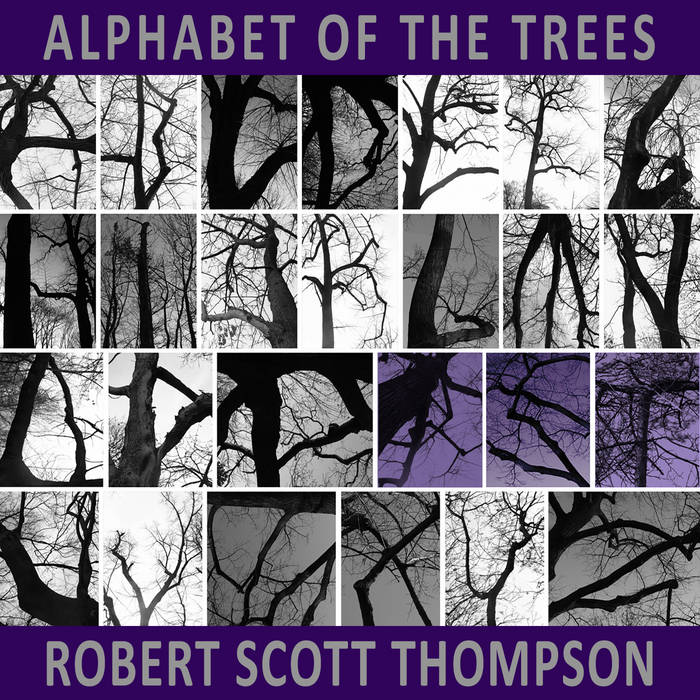 Roofhare Love the vocal elements in several of the tracks. Subtle but very effective. Title track really grabs me by the emotions. Favorite track: Alphabet of the Trees.

Often described as a ‘musical alchemist’, Robert Scott Thompson combines electroacoustic, contemporary instrumental and avant-garde music ever since 1976, naming Chopin, Satie, Stockhausen, Varèse, Cage, Bowie and Eno as his greatest inspirations. He runs his own label, Aucourant Records, home to different artists but also for his own (rather high) output (though it seems the label website is not updated since September 2016: later activities have been transferred to Bandcamp).

Robert Scott Thompson is one of those artists that seem to breathe music: his Bandcamp catalogue presents 83 album titles! (Discogs lists only 33 of these, so there’s some work to do there..)

On Alphabet Of The Trees, he presents eight dreamy and mysterious ‘classic ambient’ soundscapes,

Voice samples play a particularly important role on the tracks on the first half of this album. Sometimes up-front, sometimes hidden away, but ever-present angelic choirs, or like the spirits of the trees this album is dedicated to.

Most of the album is quite comforting (with titles like ‘Travelling In Dreams’ you’ll probably know what to expect), but with the Twin-Peaks-like atmosphere in Nights, Darkest To Fall the album ends in a relatively dark and ominous mood.

The output of Mr R. S. Thompson is nothing short of remarkable, and even more remarkable is the consistently high quality of that output, regardless of whether we deal with the most abstract or the more "accessible" material. Alphabet of the Trees sits firmly, at least in my book, on a very exciting middle ground between those two musical languages So this work is especially dear to me, as it belongs to a certain type of music that blends "tonal" with "atonal" in a way that creates an irresistable contrast and "tension" in the best sense of the word, and where anything can, and do, happen. And Mr Thompsons obvious skills in using all the technical paraphernalia at his disposal is as awe-inspiring as the musical result itself.

Some people, less accustomed to this kind of music, may only find "noise" here, where those of us open to the uniqueness of different languages of music, find amazing drama, great, sweeping beauty and the sort of aural coolness I sometimes call "sonic sensuality." This musical landscape, loaded with the most exciting movements and shapes, is like an unexplored, alien jungle, where many mysteries await those daring enough to venture.

I cannot really pick out a favourite track, they all deserve to be given the same amount of close attention, but I will say this: among the many works of Mr Thompson I have come to admire over the years, this one...belong in the top 5.