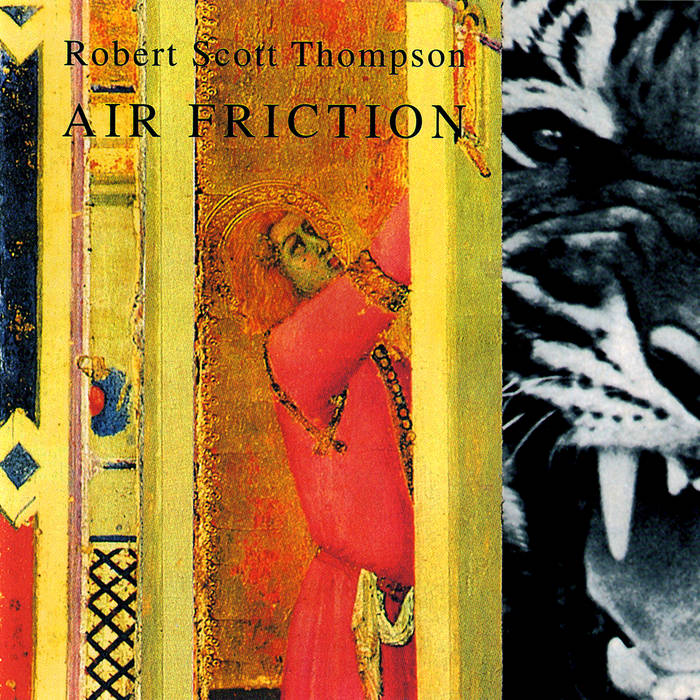 Brian Bourassa ...about as close to Brian Eno's vision of "Ambient" music as I've come, aside from Eno himself. At last, a true backdrop to life, one that doesn't beg for your attention.

Also Check out:
The New View Over Atlantis

“It is every bit as cutting edge and futuristic as those albums were (Brian Eno/Robert Fripp). In short, this album was ahead of its time.” - All Music Guide

“What a great release it is ... this is a stunningly beautiful release and very highly recommended.” - CD Spectrum

“Robert Scott Thompson’s creativity has NO ceiling! This is a winner at all levels!” - Jim Brenholts

“Overall, this is a very satisfying album of ambience.” - Ambience Magazine
_____

This release melds computer generated music, pop, world, and ambient influences into a cohesive collection of fourteen pieces, milestones of aural communication. To achieve this unique tapestry of sound, Robert uses analog and digital synthesizers, piano, acoustic and electronic percussion, electric guitar, bass, cello, and flute to create a synthesis of real and imagined timbres. Thompson creates a unique visual imagery with the music.. Conveying the right mood to make each piece create maximum impact on the listener. Robert combines various influences and creates a satisfying blend - driving rhythms, industrial cacophonies, dark ambience - forming pieces that transform and mutate throughout, avoiding the stasis of much ambience. What takes place is a compromise between the ancient and the new, the spiritual and the material. Air Friction is animated music with a fresh improvisatory spirit and a true artistic statement which further defines the ever-changing musical persona of Robert Scott Thompson.

Ambient music fans rejoice! Air Friction is available on CD and what a great release it is! The music is a drifting, meandering collage of synthesized sounds a la Brian Eno which creates a very subtle but always interesting background of beautiful sounds. This release satisfies the major premise of good ambient music in that it can be listened to on a number of different levels — I have listened to this while working and appreciated the serene calm it produced when concentration was necessary. I have also listened to this release as my primary interest and was amazed at the diversity of the 14 tracks contained on this release. This is a stunningly beautiful release and very highly recommended.

Air Friction, from 1995, is subtitled 'collected ambient music' and puts together 14 midlength (5 to 7 minutes long) gentle pieces produced from sythesizers, piano, percussion, guitar, cello, flute and computer. RST wishes the sounds as soothe and nourish, and combine his interests in computer, pop and ambient music. The piano is a strong presence in many of the pieces, providing a direct link to Satie's musique d'ameublement which RST indicates was a guide. However, the melodies sit within a broad field of percussion, vocal tones and synthesizer washes typified in the climax provided by Atmosphere, the final track. We began, however, with The moon and certain angles where high and querulous tones intrude into a deeper drifting meditation. This sets the mood which will continue over the full 73 minutes: a mellow ambience which gently undermines itself to provide a slight (and interesting) uncertainty and unease. Pure vision through the looking glass, for instance, features a pair of melodies (computer generated, which sound like harpsichords (and, I must admit, are almost Enoesque) which are played in counterpoint producing some unsettling note sequences. A Baroque-feel continues in Air friction where a 'clarinet' carries the melody over an orchestration of voices and keyboards.

As the disc progresses each track is presented like a jewel which is rotating before us - look in and focus on the different facets - the melody, harmony, rhythm or bass - and be entranced by the sum and its parts. The distant tubular bell clusters in Sky of Albion which punctuate the stately march of melody, subtle layers of percussion in 'The westward way' which also has some wonderful strange high-jittering which enters suddenly towards the end, or the cello winding through the layered voices and mysterious sounds of The shifting of spheres. The Strong Eye is reflected in Essence with odd sorties of sounds (metallic tinkles and computer-distorted flute) disturbing the synthesizer's flow or Ryoan-ji where garbled voices are deep in the mix. Surprisingly a middle eastern chant introduces Antrim then disappears, and Ireland is apparent only in some bodhran notes.

Overall, this is a very satisfying album of ambience - the pieces are sufficiently complex to allow for repeated deep listening, while producing a mood which would satisfy those who want to relax to it (although in some places it is quite melancholic). In addition to the influences of Satie and Eno which I have mentioned, I am also reminded of Bill Nelson's instrumentals - which struck me during A picture of moments (also a Nelsonish title), particularly the vibrating-guitar sound, and I then heard in the earlier tracks (I am thinking of the 'Trial by Intimacy' set and 'Chance Encounters in the Garden of Lights').

Robert Scott Thompson's creativity has NO ceiling! Air Friction is a hybrid combination of his computer music, ambient music and pop music sensitivities and sensibilities. He adds an intangible to that mix. He puts his heart and his soul into his work in an effort to create truly humanistic music devoid of egoic trapping. The gentle flow of the minimalism takes listeners toward that goal. Deep listeners will achieve harmony. Deep meditation will result in serenity. Casual listeners will enjoy the delightful sound. This is a winner at all levels!

If there are awards for an unjustly ignored albums in the ambient genre, I'd probably cast one of my votes for Robert Scott Thompson's Air Friction. With all the adoration (deserved, I might add) of works from Brian Eno (such as Music for Airports) and Harold Budd (such as Lovely Thunder and his collaboration with Eno, The Pearl), I don't understand why Air Friction is seldom mentioned. The fourteen cuts on this recording are gentle minimal sound paintings, usually quite beautiful, and ranging from just over two minutes to a notch over seven. Some of pieces bear some resemblance to Tim Story's music, except that where Story uses the repetition of a musical phrase, Thompson follows a more fluid and evolving method. For instance, the opening cut "The Moon and Certain Angles" weds delicate bell-like tones with several underlying layers of electronics, including a serene wash that bathes the song in a soft warm light. The underlying washes of keyboards ebb and flow in a series of electronic sighs. It's an evocative and emotional opening selection.

Differences between Thompson and Eno/Budd include a relative (note the use of that word) lack of "naked" acoustic instrumentation as well as a more exploratory nature to the music. Pitch bending and occasional subtle dissonance is mixed in with the sad beauty to create not so much a sense of disquiet as much as a sense of unfamiliarity - as in memories (or photographs) that have begun to fade. But these devices I mentioned do nothing to diminish the loveliness of songs like "Pure Vision Through a Looking Glass," or the title cut. Instead, they add a maturity and intellectual quality to the music (which is another similarity to Tim Story, whose recordings I consider among the most intelligent in the genre). The choruses, synth-oboe, piano and guitar on the title cut elicit deeply emotional responses - this is seriously sad music yet is devoid of faux sentimentality.

"Sky of Albion" is another gem (background echoed wood-chime effects played against an assortment of lush yet tragic keyboards) as is the rhythmic (courtesy of assorted electronic drum beats) "The Westward Way," which does contain the use of a repeated refrain (and, as such, evokes the feeling of movement along a road). On "A Picture of Moments" the pitch-bending to the synths gives the cut an off-kilter feel but in a most pleasant way - almost cheerful in fact. "The Shifting of Spheres" opens with washes of synths and wind chimes tinkling, before somber piano, synth choruses, and cello combine to paint an elegy of sorts. It's a stately piece and one that would not be out of place at a funeral, but not because it's sad - it's reverential. In fact, for some reason, when I listen to Air Friction, I can't help but think this music is meant for worship in some regard. It has a cathedral-like quality to it that I can't isolate, but I feel it quite palpably. However, thank goodness the music is never pretentious or sanctimonious. It's a testament to Robert Scott Thompson that I never heard the music calling attention to itself. Still, make no mistake about it - this is a brave exercise in ambient music. Just because I have drawn comparisons to Eno, Budd and Story - Air Friction is highly unique (the closing cut, "Atmosphere," marries hand percussion with echoed piano and muted electric guitar). But it remains imminently accessible to fans of the artists I have mentioned. As such, if you have works by them, I recommend adding this to your collection. And when you get it, really explore it - song by song on headphones. There's a lot of sonic wonder in these tracks. Make sure you hear it all.